Is Zero a Butterfly? Wait? What? That sounds like a pretty odd question to ask for C++ but let’s explore a little and see where it takes us.

So what is zero in C++? Perhaps the most obvious answer would be it is an integer and while this is true it misses a bigger story about zeros super powers in C++.

What is super about zero?

Well first some fun trivia. Zero is an octal literal, see the grammar for integer literals:

It is the only single digit octal literal, it won’t help you do anything special but might impress some of your friends.

Zero is a kind of super-literal (not official terminology), it can be converted to all sort of types, some mundane but many quite surprising. Most would not be surprised that the following code is valid:

Zero is an integer after all and we will probably not be surprised the following works either (see it live):

So how about pointers? Is zero a pointer? How about non-zero values? Are non-zero integers also pointers? Are we surprised by the following (see it live)?:

So now we start seeing some interesting behavior (powers), zero is special, [conv.ptr]p1 tells us that:

A null pointer constant is an integer literal ([lex.icon]) with value zero or a prvalue of type std::nullptr_t.

but other integers do not have this super ability and if we want to convert them to pointers we must use reinterpret_cast. This will be a questionable but implementation defined mapping. We inherit this directly from C and pre-C++11 we used to allow constant expressions that evaluated to zero to be also be consider null pointer constants. So the following prior to C++11 was also valid (see it live):

Ok, this probably feels like cheating but it works and is likely pretty surprising. Here we are seeing the effect of a parameter of type array of T being adjusted to pointer to T, see [dcl.fct]p5:

After determining the type of each parameter, any parameter of type “array of T” or of function type T is adjusted to be “pointer to T”.

This is another thing that C++ has inherited directly from C. In C++ we can avoid this adjustment by passing array by reference. This is used for example by std::end to determine the size of the array:

but C-style arrays are not idiomatic C++ and we should prefer to use std::array or std::vector but often for generic code we need to support C-style arrays, as the std::end example above.

What we are seeing here is that std::string has a constuctor that takes a const char* (I am being lose here, really should be CharT) and copies the contents:

Due to the legacy C conversion of zero to a null pointer constant we can convert zero to a const char* and thus we can call the std::string constructor that expects a null-terminated C-style string to copy the contents of. Worth noting this an easy trap to fall into:

Ironically the following does not work (see it live):

One last place where zero is special and that is a declaring pure virtual member functions:

So this brings an end to zeros super fun, but it does leave us with one burning question (How does one turn a meme into an article) also see original meme that inspired this post: 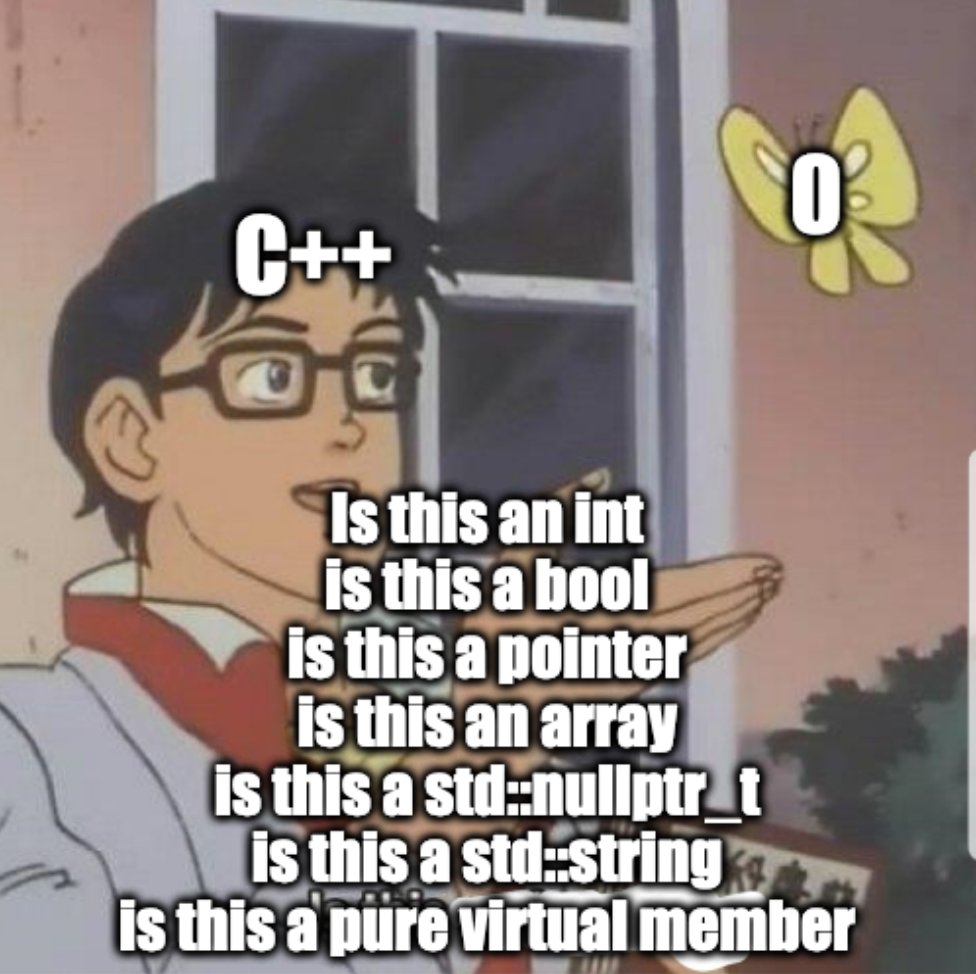 Thank you to those who provided feedback on or reviewed this write-up: Ólafur Waage and Jan Wilmans.

Of course in the end, all errors are the author’s.

« Maximal Munch and C++ Down with typename »